Despite all of their advantages – sliding doors, easy entry and exit thanks to a low floor, plenty of space for people and the like – fuel economy has not been a highlight for MPVs.

Most have relatively low mileage, especially in stop-and-go driving, the kind of driving that most parents with young children often do.

Recognizing the demands of queues for schools and football practice, FCA released the Chrysler Pacifica plug-in hybrid three years ago and now Toyota is releasing a Sienna hybrid just for the ’21 minivan redesign. That’s right, if you want a Sienna, it comes with just one powertrain: a hybrid.

You could call it a risky decision, but Toyota is the world leader in hybrid sales, thanks to the Prius launched 20 years ago. If anyone has a favorable buyer’s base for such a tactic, it’s Toyota.

However, a hybrid family transporter may not be everyone’s cup of tea. More on that later.

The exterior of a minivan is usually the least exciting part, but our Platinum AWD 21 test vehicle came in an attractive dark metallic green shade that turns more than a few heads.

The Sienna’s sheet metal isn’t as edgy as the Pacifica’s, and Toyota’s signature large grille (split in this vehicle, with a slim upper grille and giant lower grille) continues to polarize. But overall, we’re giving this pickup a solid B on appearance.

The interior is where a minivan needs to shine, and the Sienna doesn’t disappoint in that regard.

The interior of our test vehicle is attractive, predominantly brown with accents of ivory and black. There are a few design touches, like faux wood film on the dashboard and doors, rubberized trays and pads with a similar wood texture etched, as well as soft honeycomb material covering parts of the brown steering wheel. and the huge Grab Bars mounted on the B-pillar in the second row.

Almost all newer vans have some sort of fancy feature and while the Sienna doesn’t break new ground in this area, it does have both a vacuum cleaner and a cooler / fridge seen in recent rival vans, though both are. not in early versions due to a vendor problem, Toyota says.

The Sienna’s innovative center console offers generous stowage space (six cup holders!) We expect its largely plastic sides to scuff quickly due to floor intrusion, but it serves many functions. .

Up front the console flows into a box with fixed armrests at the edges – throwing us a curve because initially we try to lift the console box cover by grabbing the armrests.

There’s huge space for a purse or bag under the console, gearshift lever, and exposed cup holders (two more cup holders in the front are tucked away in a lidded bin). The front of the console looks more like a shelf hanging from the dashboard.

Full IP has a strong horizontal layout, with stacked layers. There is no real center console, just a cluster of HVAC buttons flanked by vents and above which sits a 9 inch. Touch screen (23 cm).

There is a wireless phone charger, a 12V outlet and a USB port on the front, and inside the central housing are two more USB ports, one USB-C.

On the back of the console, the console also has two USB ports, one of which is USB-C, as well as a 120V AC outlet, so there’s obviously no shortage of places to charge tech gear.

Between the seats in the second row is a low console in the form of a tray. Second row passengers also have pockets in the backs of the front seats for storing items, as well as access to six cup holders (two on the center console, two in each side door pocket, and two each under the form of nets attached to their seats).

There are three third row seats, with each outboard seat accommodating two cup holders molded into the wall; a set of USB ports can be found on the passenger side.

All three rows are comfortable, with plenty of legroom in rows one and two (except for the center console intrusion in the middle) and decent legroom in the third row. The second row seats slide and recline for added comfort, but we’re missing the ultimate feature: a footrest. (However, the Ottomans are fitted to the second row captain’s seats in the Front-wheel-drive Limited and Platinum trims.)

Collapsing the 60/40 third row seats into the ground is a few step process involving ribbons and levers (photo below). It’s relatively easy, but it seems odd that a Platinum trim level doesn’t have an electric fallback option. We can’t figure out how to lock the collapsed third-row seats into place in the bin, and they stay loose and bouncy.

The second row seats can partially fold down to increase floor space for third row entry and exit, but like most minivans, children are expected, not children. adults, are back there, so our adult feet get stuck on exiting the area. 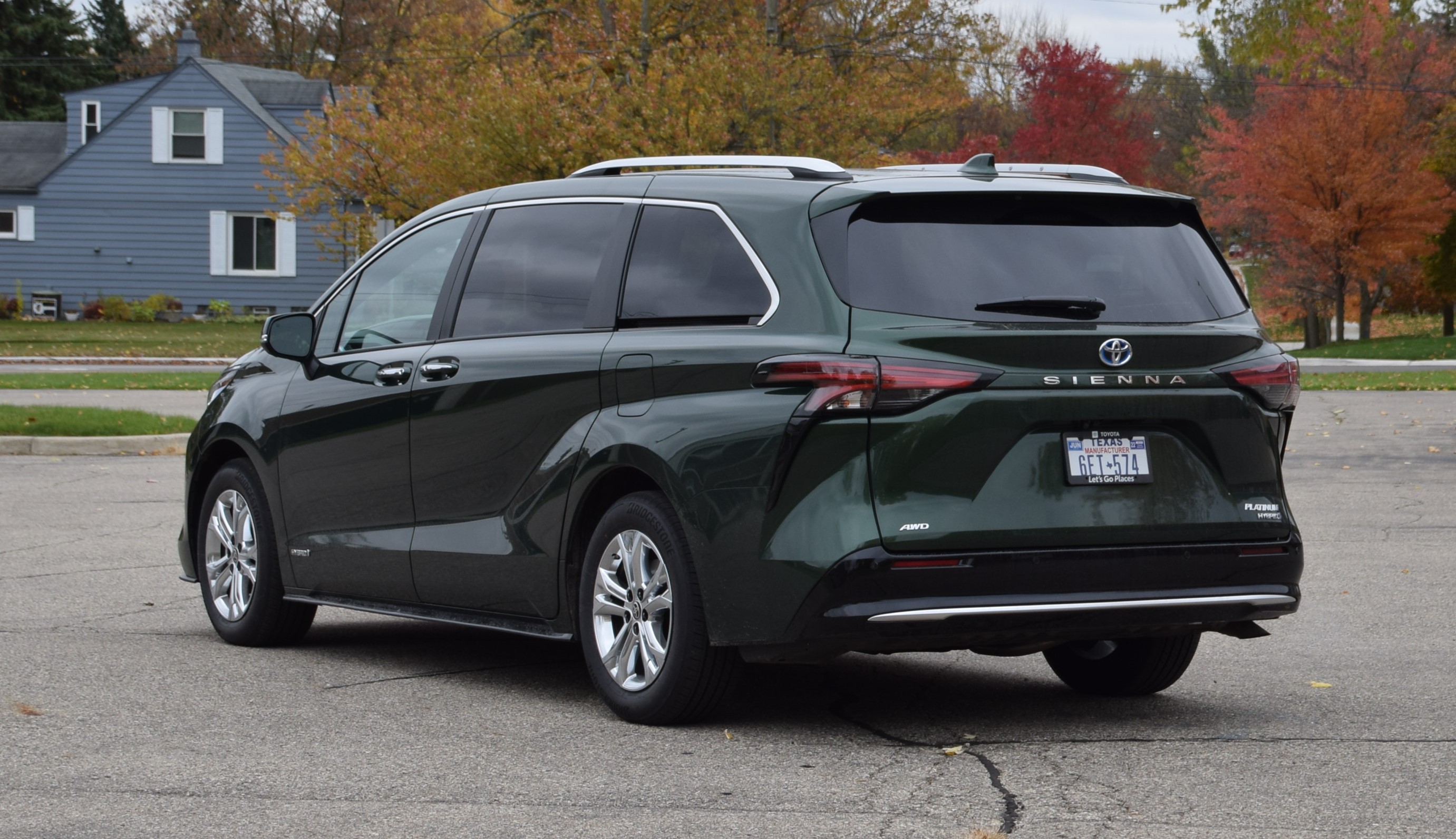 The quality of the materials is mixed. Soft-touch upper front doors, dimpled grab bars and circular knit headliner are nice, while the second-row seat levers look like hard, cheap plastic.

Most of the controls are within easy reach, with the exception of the seek / track buttons to the right of the touchscreen and the close and open sliding door buttons on the interior B-pillars. Usually they are placed high but, probably because of the giant grab bars, they are low – a difficult place to find on a cold and windy day.

The Sienna is powered by Toyota’s Dynamic Force 2.5L 4-cylinder gasoline engine. already in a host of models, including hybrid variants of the Avalon, Camry, RAV4 and Highlander. A large drive motor, a 134 kW (180 hp) permanent magnet synchronous motor making 199 lb-ft. (270 Nm) of torque, is standard. In AWD Siennas like our tester, there is an additional rear motor making 40 kW (54 hp) and 89 lb-ft. (120 Nm).

For city driving, the hybrid system is excellent, with decent low-end torque from the engine of 176 lb-ft. (239 Nm) at 4,400 rpm. Electric motors have immediate torque of course, but as is the case with most Toyota hybrids, driving on pure electric power (i.e. in EV mode) is only possible. at speeds below 40 km / h. However, the engines provide extra torque while driving in Eco mode, which is the bulk of what we do.

The Sienna’s drivetrain, as we’ve noted in previous Toyota hybrids equipped with CVTs, hums audibly when accelerating and cruising at higher speeds, although the vibrations are minimal. If you find the powertrain noise bothersome and don’t want to turn on the radio to counter it, this vehicle might not be for you.

However, we give the Sienna five stars for its wind noise attenuation. Despite gusts of wind exceeding 30 mph (48 km / h) outside our vehicle, the interior presents a tomb silence.

We still believe that switching to a hybrid-only powertrain is the right decision as we experience incredible fuel economy in our test drive, which mostly traverses streets at 30 mph (48 km / h) and below.

Technologically, our Sienna has both Advanced Driver Assistance Systems (ADAS) and infotainment features. 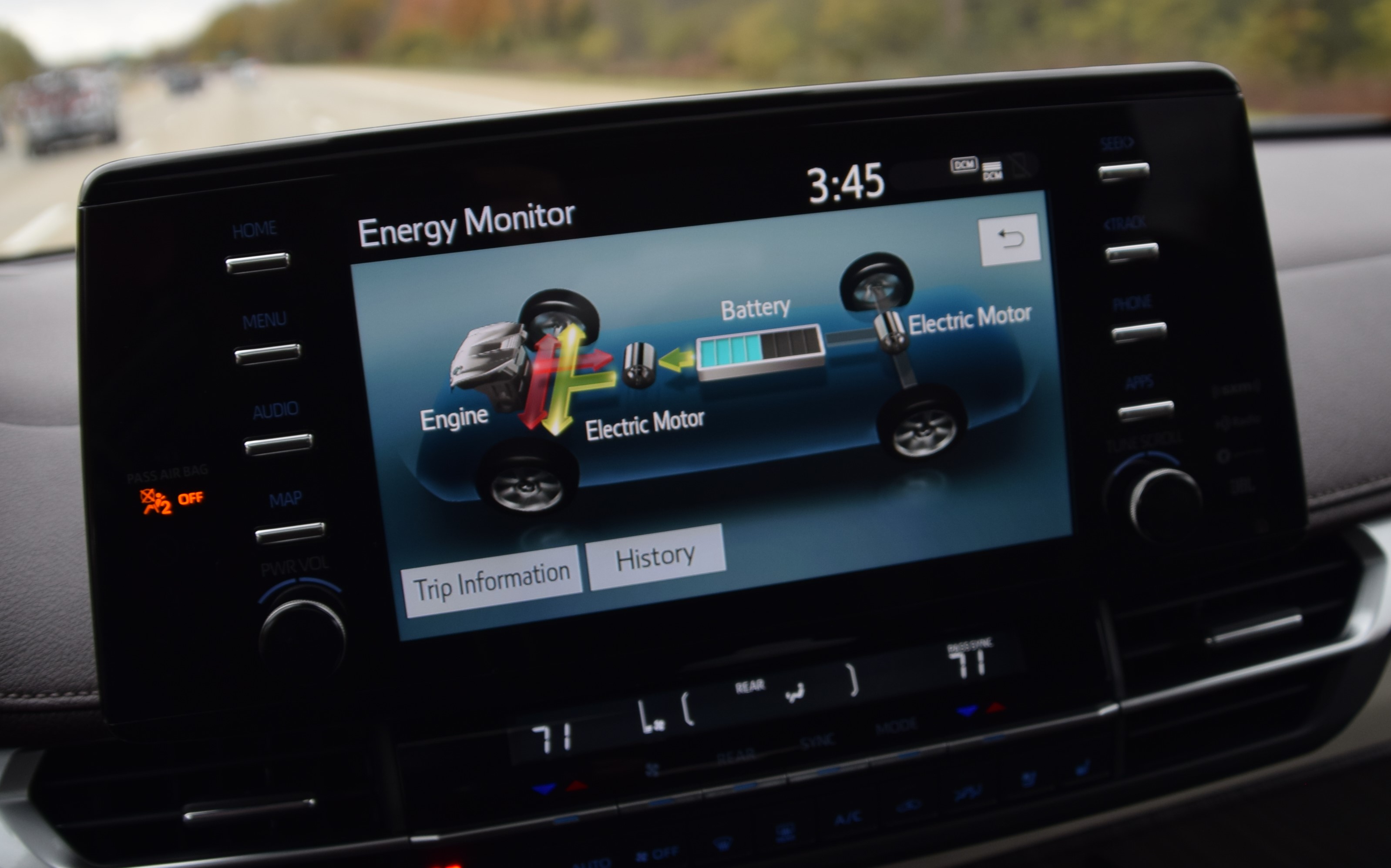 ADAS is a mixed bag, like in most vehicles.

After a near-stellar performance slowing down and stopping behind traffic all afternoon, Adaptive Cruise Control suddenly accelerates our Sienna as we approach a stopped car at a red light. We step in quickly (remember this is ‘assistive’ technology – stay alert) and apply the brakes, assuming the bright sun and silver paint on the previous vehicle thwarted the cameras and the sensors.

Lane departure and lane marking technologies are less surprising, like many people constantly losing and detecting lane lines and sometimes pulling us closer to a lane line than we would like.

Most ADAS functions are adjustable through the gauge cluster menu, with sensitivity and alert types selectable.

Infotainment generally works well, with strong speech recognition performance for radio stations and POIs, albeit triggered by a home address.

We don’t try the standard Apple CarPlay due to the lack of a cord, but Bluetooth helps us out once we find it. Toyota’s infotainment menus continue to get confused, as Bluetooth is found in the setup menu, and not in Projection or Phone as one would expect.

Speaking of oddly placed features, Toyota’s localization of heads-up display settings at the bottom of the cluster menu remains boring.

Toyota believes that not only will the typical minivan demographics (families with kids, empty nests) be drawn to the Sienna, but also companies making deliveries, which may seek a fuel economy advantage over traditional vans. This makes sense, because battery-powered electric vans are yet to come – and a hybrid van like the Sienna doesn’t need to be charged.

Despite the dramatic drop in sales of minivans over the past decade and the rush for commercial vehicles, a small van still has a lot to offer. The new Sienna ’21, currently on sale in the US from $ 34,460 (LE FWD) to $ 50,460 (Platinum AWD), excels in many areas (comfort, utility, fuel economy in the city) and is expected to allow Toyota to maintain its share of around 12% in the segment. 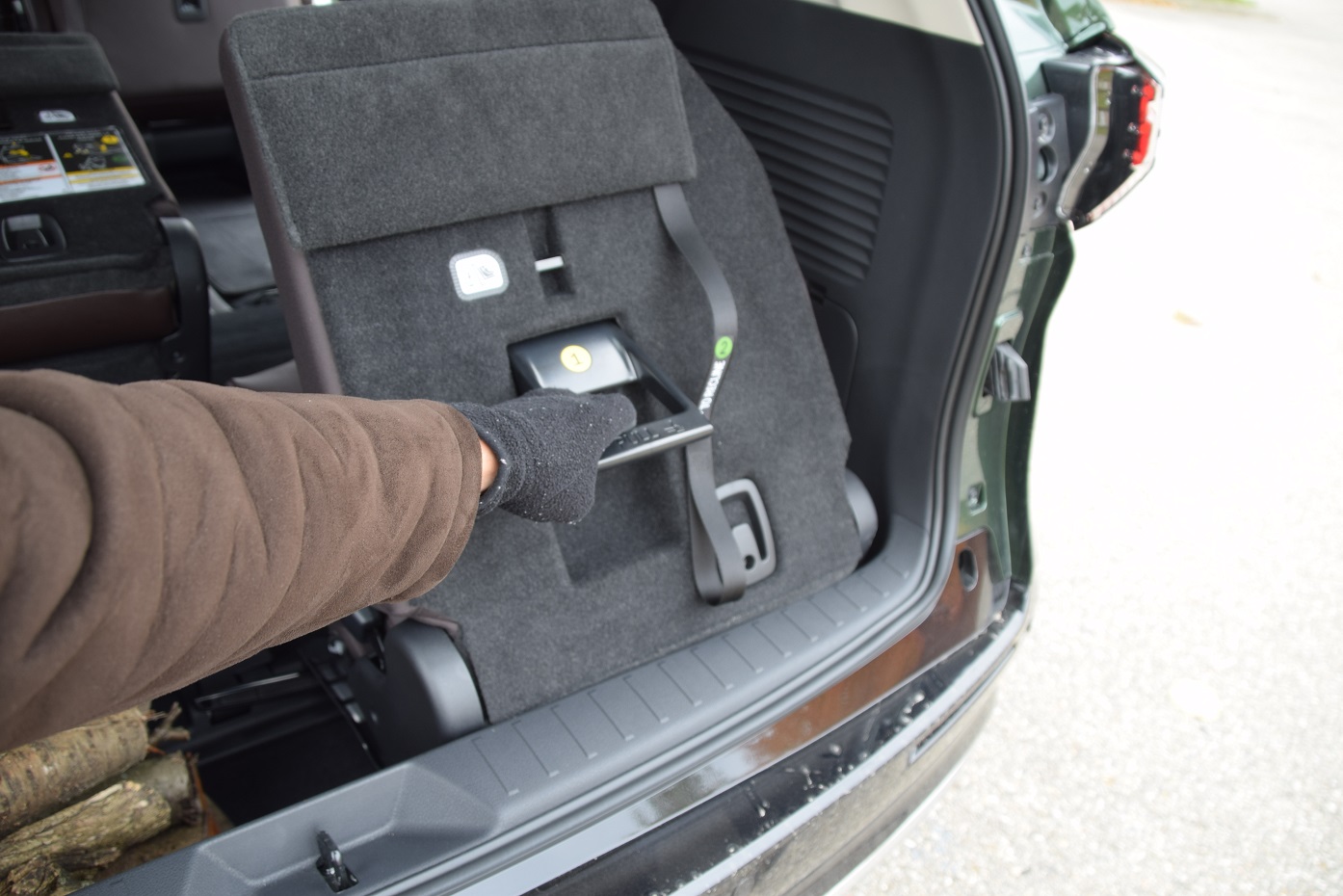 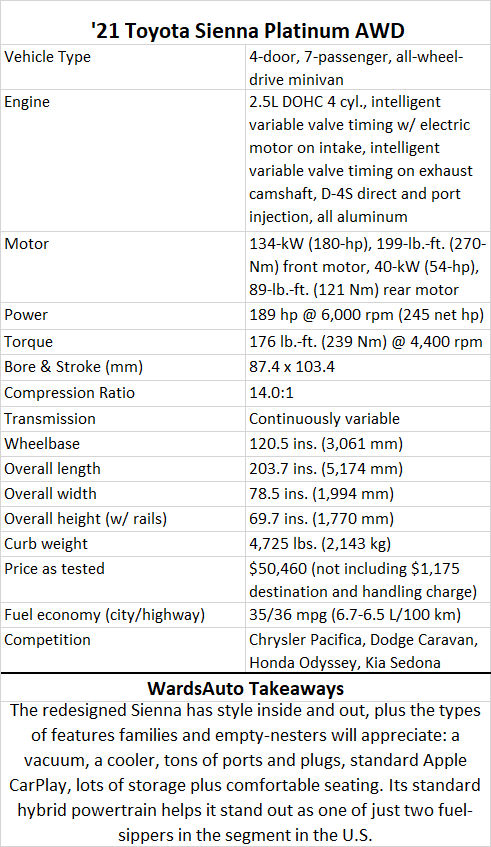